Is a US-made Rocket Engine in Our Future?

Recently the head of the US Air Force Space Command, Gen. William Shelton, said he believes now is the time for the United State to begin developing a new engine.

According to the Defense News article he believes that a national program would be a good place to start. Currently the engine used on the United Launch Alliance Atlas V launch vehicle is supplied by Russia, which could cause problems with supply in the future.

END_OF_DOCUMENT_TOKEN_TO_BE_REPLACED

There are many rules and regulations governing the manufacturing sector, including the Defense Production Act, which helps to ensure the military is properly prepared. 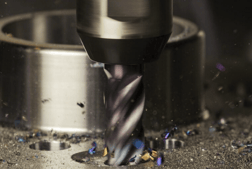 The Act was passed in 1950 during the Korean War and was a part of a broad civil defense and war mobilization effort during the Cold War. The Act allows the president to issue executive orders for purchases that need to be completed quickly in order to maintain national security. It allows the president to establish regulations, orders, etc to allocate materials, services, and facilities to promote national defense. Finally, it also authorizes the president to control the civilian economy so that scare or critical materials necessary to national defense are available.

END_OF_DOCUMENT_TOKEN_TO_BE_REPLACED

For a machining job shop that does regular contract work with government organizations, some key certifications and qualifications often need to be met.

In our last blog, we talked about the ITAR certification, but there are several more regulations and accreditations that are crucial for work with any job with government involvement or oversight.

END_OF_DOCUMENT_TOKEN_TO_BE_REPLACED

On December 31 of last year, a new defense bill was signed into law that further oversees the Pentagon’s transition away from a Cold War-style footing.

This is not to say that the DoD is getting stinted as far as new money. In fact, defense spending will actually increase over the next few years, just not as quickly as was originally intended. So, what is this new money going to be spent on? In a word, drones.